Speaking Tuesday at the Senate Armed Service Committee, the US Centcom Commander, General Joseph Votel, came out openly in favor of the P5+1 nuclear deal with Iran. Votel even warned over possible consequences if President Trump withdraws from the pact. 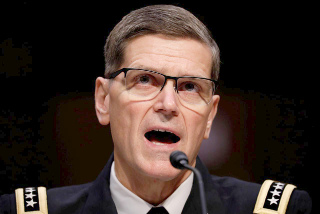 His comments centered on the deal addressing US and international concerns about Iran having a nuclear weapons program. He cautioned if the US breaks the deal, they will need to find some other way to deal with that issue.

Iran, of course, doesn’t have a nuclear weapons program, and didn’t have such a program for years before the deal was made. Under the deal, however, they are obliged to grant UN inspectors a level of access unrivaled worldwide, which many see as a guarantee no secret program exists.

President Trump has opposed the deal from the start, and is demanding broad changes to the already negotiated pact. Killing the deal, however, ends all that extra UN  access, and gives Iran no reason to offer so much special access to civilian nuclear sites.

Votel very directly contradicted Trump with his comments, saying he believes it is in America’s best interest to stay in the deal.