Recently,various US officials have been suggesting substantial attacks on the Syrian military are imminent. This talk of attacking Syria has provoked a warning from the Russian Foreign Ministry, and a second warning from top Russian generals. Russia’s military chief of staff warns Russia would retaliate “against the missiles and launchers used” by the US if such a strike threatens Russian forces in the country. 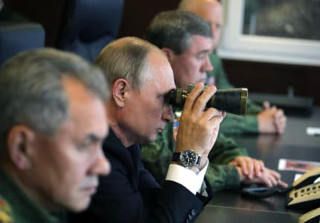 That’s clearly a game-changer, as the US has previously believed that they could carry out the occasional attack against Syrian military targets with impunity. This was the case with the April tomahawk missile attacks against a Syrian air base done over a putative chemical weapon attack, which Russia criticized but didn’t act over.

US officials have been drumming up multiple pretexts for another strike, including more poorly documented chemical weapons incidents, Syrian offensives against rebel factions in Eastern Ghouta, and Syrian airstrikes that are either near or in a de-escalation zone in the Daraa Province.

With Russian Foreign Minister Sergey Lavrov warning of “grave consequences,” and the Russian military talking retaliation, it’s clear US strikes would not be consequence-free. Rather a US strike under any justification would risk a long feared direct war between the US and Russia.

That’s a concern long-standing among US officials, and as recently as December, a top US general was warning US troops to prepare for a “big-ass war” with Russia. Even during the 2016 campaign President Trump made clear he was very aware of the risk of a Syria War leading to a Russia war. Trump will have to manage constant pressure to do more against Syria to avoid steering into such a disastrous conflict.