The Syrian Observatory for Human Rights has reported on Monday that they believe 511,000 people have been killed in the course of the Syrian War, as the conflict approaches its seven year anniversary in the next few days. 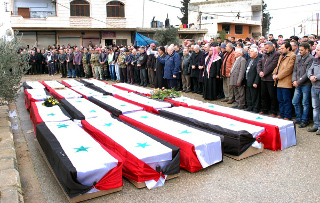 The Observatory said they have identified over 350,000 of the dead by name, and that the other 161,000 are “known” deaths, but of people whose names they just don’t have. They claimed about 85% of the war dead are civilians.

While other Observatory statements offered a lot more elaborate breakdowns, that does not appear to be the case this time, with the split among different combatant groups not available, and likely a lot harder to categorize given how many factions have repeatedly changed sides over the past several years of war, and how many don’t even exist anymore.

Among combatants, historically, the Syrian military has borne the biggest brunt of casualties, though whether that would be true across the entire war is unclear, with so many assorted side conflicts fought in all that time.