South Korea’s diplomatic delegation, after a productive two-day visit to Pyongyang, is headed to the United States. But while the expectation had been to try to court the US into direct talks with North Korea, plans are likely to have changed. 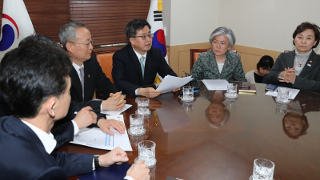 That’s because President Trump’s tariff scheme, with the threat of global trade war that comes with it, is expected to be implemented any day, setting a 25% steel tariff, and a 10% aluminum tariff.  That’s a problem for a lot of nations.

While this risks seeing push for direct US-North Korea talks lose momentum, it may also convince South Korea to stake out a more independent policy, working on improving ties with North Korea irrespective of US wishes.