Speaking on BBC Radio 4, Saudi Foreign Minister Adel al-Jubeir defended his nation’s 2015 invasion of Yemen, and ongoing attacks in the country as a “just war, supported by international law.” 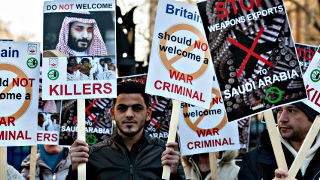 The Saudi FM did not elaborate on how the Saudi war was legal, but rather went on to accuse British opponents of the conflict, including those protesting the Saudi crown prince, of “misunderstanding,” while insisting the whole conflict was the fault of the Shi’ite Houthi movement.

This is especially important in the US and Britain, as both nations have been selling the Saudis weapons being used in the war, leading protesters to complain that they are complicit in the war-crimes.

Jubeir did not address the deaths, rather insisting it’s a war that was “forced” on them, and suggesting Britons in particular should be more exciting about Saudi Arabia’s economic diversification, which he promised would benefit the British economy substantially.