Speaking at the AIPAC conference on Tuesday, Israeli Prime Minister Benjamin Netanyahu sought to shift focus away from his mounting political and legal struggles to focus instead on a favored subject of discussion, how worried he is about Iran. 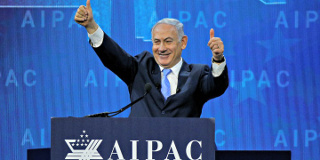 Holding a map of the Middle East which claimed to show Iran’s growing “empire,” Netanyahu declared that “darkness is descending on our region,” while talking up Israel’s willingness, and indeed eagerness,  to confront them militarily in Syria.

At the same time, Netanyahu talked up discussions with President Trump earlier in the week, saying that Trump remains committed to walking away from the P5+1 nuclear deal, adding that Israel and other countries in the region stand by that decision.

Netanyahu sought to die Trump’s hostility to the nuclear deal to general opposition to Iran’s putative “aggression,” and said Trump’s position proved he won’t accept a “nuclear-armed Iran,” even though Trump’s objections about the Iran deal are entirely based on extending restrictions on Iran’s civilian nuclear program.