Adding to the death toll in Turkey’s invasion of northern Syria, a large number of people were reported killed in Turkish airstrikes on Friday night and into Saturday, with Turkish officials saying they’d killed 40 people, all members of the pro-Syrian government “popular forces” militias. 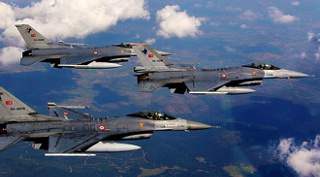 The Kurdish Red Crescent also reported a number of deaths among the militiamen, though they said final figures were unavailable. Over 20 bodies had been recovered so far, and more were expected. Syrian state media reported at least 20 civilian casualties, but declined to offer insight on militia deaths.

Turkey is said to be making progress in their offensive against Afrin after a very slow, high casualty start. The town of Rajo has fallen either partly or wholly, depending on the source, and Turkish Prime Minister Binali Yildirim has declared “Afrin is surrounded,” saying all border areas were cleared.

Still, the overwhelming majority of Afrin District remains in Kurdish YPG control, with Syria sending reinforcement militias to try to slow the Turkish advance. Turkey has said once Afrin falls, their next target will be Manbij, and after that, it seems Kurdish territory further east will be targeted.