Despite some officials saying that there isn’t a specific plan to attack North Korea in place, the Pentagon continues with its military exercises related to starting such a war, with classified exercises reported last week in Hawaii. 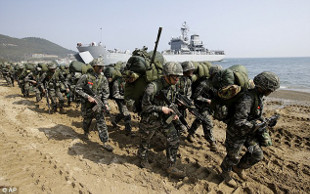 One big issue is that the Pentagon isn’t necessarily going to be able to readily evacuate wounded US troops from the Korean Peninsula in an efficient manner. This is an even bigger problem if North Korea uses chemical or nuclear weapons to retaliate from the US strike.

Commanders were told 10,000 Americans would be wounded in combat just in the opening days of this war, with Gen. Milley saying it will be brutal “beyond the experience of any living soldier.”

Despite the horror of such a conflict, Pentagon and White House officials continue to insist that a military option is in place, with President Trump in particular eager to talk up the military option.