While Turkey has managed to seize a couple of villages in the northernmost part of Syria’s Afrin District, a new offensive push launched Thursday appears to be going poorly, with the Turkish military confirming eight soldiers killed and 13 wounded. 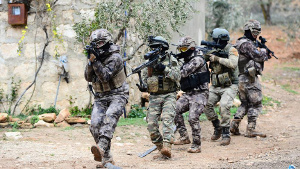 This figure only includes Turkish soldiers, and not their Free Syrian Army auxiliaries, nor any Kurds that got killed in the fighting. It’s still one of the deadliest days for Turkey since the invasion began, and many of the wounded are described as being in critical condition.

Turkey has been invading Afrin, a Kurdish territory, for over month now, and has promised to extend the war into nearby Manbij, a city captured by the same Kurdish YPG forces last year.

There had been some hope that the 30-day UN ceasefire might see fighting in Afrin slow, at least a bit, though Turkey insisted even at the time they didn’t consider their invasion bound by the ceasefire, and this latest push seems to underscore that their attacks will continue.