While Turkey’s invasion of the Afrin District in northern Syria is a lot slower going than anyone expected, the Turkish state media is still hyping the limited amount of territory they’ve actually seized, amounting to two Kurdish villages. 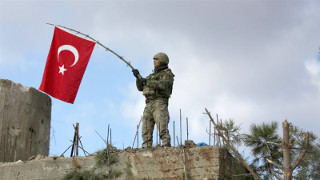 Those villages, the closest to the Turkish border, provide a land corridor between two different enclaves held by Turkey-backed FSA rebels, the city of Azaz and the corner of the Idlib Province.

Further more, Turkish media is noting that this cuts the YPG forces in the area off from the Turkish border, though since Turkish troops have been invading through that border, and the invasion shows no sign of ending, that lack of border access seems meaningless.

The land corridor isn’t particularly meaningful for the FSA either, since Turkish support means they can criss-cross enclaves through Turkey when they have such a need. Still, this and a lot of casualties are all the Afrin invasion have accomplished yet, and Turkey’s determination to keep media reports on the war upbeat obliges them to present this as something useful.