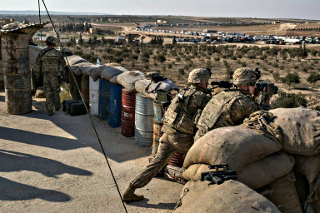 Still, the two sides are apparently talking to one another about that possibility, with one unnamed Kurdish official saying Syria has already committed to sending reinforcements to the city of Manbij, which Turkey had publicly identified as their second target after they take Afrin.

This is potentially a very complicated matter. The Kurds captured Manbij from ISIS earlier in the war, and the city is held by Kurdish YPG fighters along with a smaller number of US troops. The presence of the US troops potentially made it difficult to Turkey to invade.

The presence of the US troops also makes it difficult for Syria to send allies to resist the Turkish invasion, as the US has tended to kill Syrian pro-government forces, in rather large numbers, whenever they get even sort of close to US deployments. Syria doesn’t support the US having troops in their country.

Both are on the side of the Kurds at this point, but it’s not at all clear how they can co-exist, let alone co-exist while resisting a Turkish invasion. Though US commanders have said they’re ready to fight if Turkey starts attacking, the US and Turkey have also made a deal to try to avoid a fight over Manbij, one which Turkey hopes will end with US and Turkish troops in the city and the Kurds kicked out.