Medical officials are reporting that at least 14 people were killed, many of them soldiers with the Yemeni military, and 40 others wounded in a major attack in Southern Yemen’s port of Aden, where two suicide bombers and a number of gunmen attacked an anti-terror unit’s headquarters. 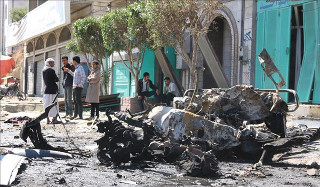 ISIS has issued its own statement claiming credit for the Saturday attack. This is the first major bombing reported in Aden since before last month’s fighting between the southern separatists and the Saudi-backed Hadi government.

Yet bombings are not uncommon in Yemen, with ISIS eager to expand its own presence in the country through high-profile attacks, and a major al-Qaeda affiliate, AQAP, also eagerly hitting targets across Yemen’s southern coast.

Why this particular “anti-terror unit” was attacked is unclear, but the casualties, particularly among the wounded, appear to have included a substantial number of civilian bystanders, Southern separatists denied reports that one of their buildings was also targeted in the strike, saying the building was unharmed.