The United States is already the world’s leading exporter of weapons, by far. This fact is driving record profits for well-positioned US arms-makers on record sales to every country on even sort-of good terms with the US. 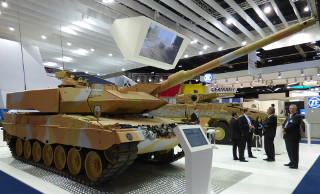 With the US government increasingly gauging its export success on weapons sales, “enough” simply isn’t an option, and President Trump is finalizing another policy guidance which will attempt to find major boosts to sales above and beyond what’s already been sent abroad.

We’ve already seen some efforts toward this end, centering around making State Department officials public shills for US arms dealers, going to conferences to try to sell arms to other nations. The new guidance will aim to weaken the already paltry limits in place on exports.

The idea is that sometimes the approval process for sales abroad is too slow, or too difficult, and that’s convincing some nations to shop elsewhere. It’s not clear who these nations are, though attempts by Congress to limit exports to places like Saudi Arabia because of their involvement in war crimes have done little to slow sales.

Even there, the ability to grow sales with laxer rules are limited, because other countries plainly aren’t making huge sales that the US can poach in the first place.