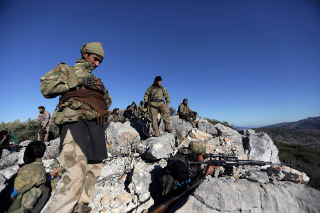 Turkey invaded Afrin last month, vowing to expel the Kurdish YPG from the area, and talking up plans to attack other YPG areas across northern Syria. They have faced intense resistance from the YPG, and from locals conscripted to fight against the invading forces.

So far the YPG has prevented the Turks advancing too deeply, and reached deal with Syria over the weekend to get Syrian reinforcements into the area. Since Turkey is backing the rebels, Syria is loathe to see them take the 25% of the country under YPG control.

Exactly which militias were the first to arrive in Afrin is unclear, though Hezbollah has implied they were involved, publishing pictures of some of the fighters, and vowing to “support the locals against the aggression waged by the Turkish regime.”

Turkish artillery opened fire more or less immediately after the militias crossed a checkpoint into Afrin, and so far seems to have pinned them down from directly joining the fight. Syria’s commitment to do so, however, likely means more will be sent.