Intense Syrian airstrikes and shelling against rebel-held parts of Eastern Ghouta, a suburb of the capital city of Damascus, has inflicted the deadliest two-day casualties in the country in years, with an estimated 250 civilians killed in 48 hours, and another 1,200 estimated wounded. 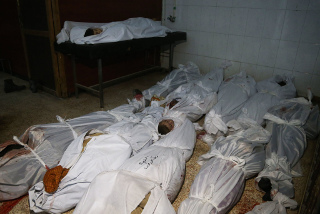 Casualties have been mounting in Eastern Ghouta in recent weeks, as the Syrian military’s victories elsewhere have allowed them to focus anew on trying to expel the rebels from their last holding near the capital city.

Rebels have held much of Eastern Ghouta throughout the Syrian War, and while some of the frontier areas have been surrendered back to the military in evacuation deals, the key strongholds don’t seem willing to countenance similar deals.

Eastern Ghouta is particularly important because the rebels within have used it as a staging area to attack the capital, most recently mortar fire against the city, but also at times outright infiltration through tunnels.

With the rebel-held parts of Eastern Ghouta all towns and cities, strikes against them have tended to cause large amounts of civilian casualties. This has been a recurring problem throughout Syria, with no one showing an ability to reliably target militants.