Long-standing US demands for NATO member nations to all spend at a bare minimum 2 percent of their GDP on their militaries don’t seem to be panning out, with only a minority of NATO nations, even counting the ones who were already spending that much, having any intention of doing so in the future. 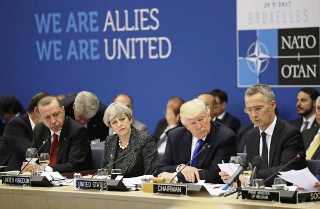 15 NATO members, including several substantial economies, have no plans to get to 2%, including Germany, Canada, Italy, and Spain. The US, UK, and Poland are already spending over 2%, with the US spending by far the most. France and Turkey, along with four smaller nations, intend to get to 2% in the future.

The US has pushed hard for the 2% minimum as a “modest” goal, insisting it is unfair how much more they spend. Yet many nations see no reason to squander such an amount on their military, arming up forces they don’t need for wars they don’t want.

There is also the plain fact that the US is the world’s largest arms exporter by far, which means much of these increased budgets would be going into the coffers of well-placed US arms makers, which makes countries with peaceful borders see the US push as a cynical attempt to sell more weapons.