The ever-escalating US air war in Afghanistan is having little real effect on the war against the Taliban, but has managed to ensnare an entirely distinct faction in Northern Afghanistan into it, one which the US hadn’t been targeting for years. 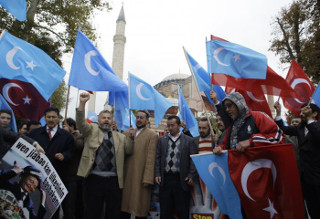 Chinese Uighurs, operating under the East Turkestan Islamic Movement (ETIM) banner, were regularly swept up in the initial US invasion a decade and a half ago, and recent US airstrikes in the area along the Chinese-Afghan border have increasingly targeted their forces as well as Taliban in the area.

Why the US is suddenly interested in targeting them is unclear, though NATO issued a statement suggesting it was to prove to them that cross border attacks weren’t safe. Either way, the Chinese are expected to be quite happy about this.

The Chinese government doesn’t think highly of the Uighurs in general, and considers the ETIM both a separatist movement and a terrorist organization. Such groups are heavily suppressed within China, which is why Uighurs often are fleeing into nearby Muslim countries, where their religion and activities are less conspicuous.