Throughout the most recent US war in Iraq, the massive damage done in the course of heavily bombing major cities and destroying bridges was seen as just another bill the US would be stuck with afterwards. The Trump Administration doesn’t see it that way, however. 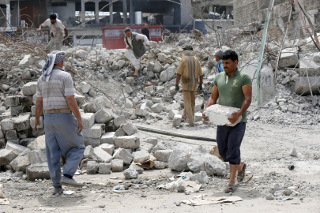 Rather, US officials say they expect Iraq’s neighbors to “pour in money” as a way to improve relations over the long term, and to try to limit Iran’s substantial influence inside Iraq.

Yet Iraq doesn’t have that many non-Iran neighbors, and while Saudi Arabia is likely to contribute to fix damage in the Sunni part of Iraq, it’s probably not going to approach $100 billion. With Iraq’s own budget stretched thin, repairing the parts of Iraq the US destroyed over the past two years is likely to be a very slow effort indeed.