An anti-tank missile ripping through one of Turkey’s most advanced and most expensive tanks earlier this week marked one of the deadliest incidents yet for their invasion of northern Syria’s Afrin District, and their war against the Kurdish YPG. Immediate speculation was that, the YPG being US-armed, the missile was probably American. 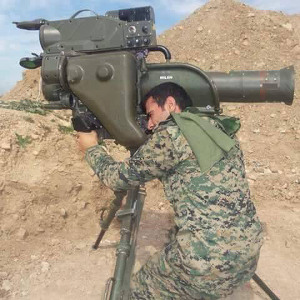 Yet the latest reports out of Syrian Kurdistan suggest that may not have been the case, with YPG officials saying that many of their anti-tank missiles actually started in the Turkish military before finding their way to them through the black market.

Turkey’s previous invasion of ISIS-held northern Syria, starting in Jarabulus, left a lot of Turkish-backed rebels with a lot of Turkish military equipment, but not a lot of cash. Unsurprisingly, Jarabulus and other towns quickly saw the rise of huge black markets full of Turkish arms.

Despite Turkey’s known hostility toward Kurds, the black markets seemed more than willing to sell to the YPG, and even now, with Afrin under siege, supplies are coming from such markets all the while to the Kurdish forces.