US coalition forces have issued a statement on Wednesday confirming a series of US airstrikes against Syrian pro-government forces along the Euphrates River. The statement insisted that the attacks were in “self-defense.” 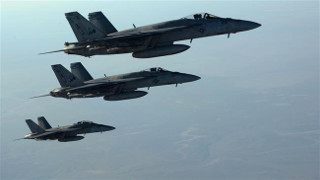 The statement was very light on details, but accused pro-Syrian forces of attacking the “headquarters” of the Syrian Defense Forces, where US troops were stationed. No casualties apparently happened, but this was enough to launch a series of airstrikes against nearby forces.

It’s not clear who the US forces attacked, or what casualties, if any, were inflicted. Iranian forces are known to be deployed in the area, as are some Russians, either of whom might be labeled as “pro-Assad” by the US government, but the attacking of which could have substantial ramifications.

Such strikes reflect the reality that, after the defeat of ISIS, the US has said troops in Syria are there primarily with an eye toward imposing regime change in Syria, and picking fights with the Iranians.