Speaking at the University of Texas on Thursday, Secretary of State Rex Tillerson told an audience that while the US doesn’t specifically advocate for regime change in Venezuela, he believes it is likely that the military will carry out a coup d’etat against President Maduro. 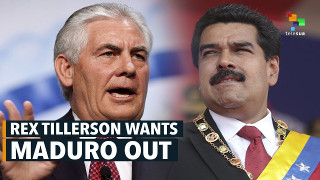 Tillerson said he wasn’t sure abut the exact timing of the coup, but suggested the Venezuelan junta would be “an agent of change” for the nation. He also urged President Maduro to resign, saying that would be the “easiest” form of regime change.

His claim that the US doesn’t advocate regime change is laughable, as President Trump was not six months prior threatening to attack Venezuela outright, with Vice President Mike Pence dubbing the nation a “failed state” and a threat to the US.

Venezuela’s military has historically deep ties to the US, which has led to past coup attempts being pinned on the US. Tillerson, in his comments, may be trying to get out in front of the next attempt by disavowing direct involvement before it even happens.