US officials have confirmed that a test of the advanced SM-3 Block IIA missile defense system in Hawaii on Wednesday has failed, proving unable to intercept test intermediate-range missiles out of the air. 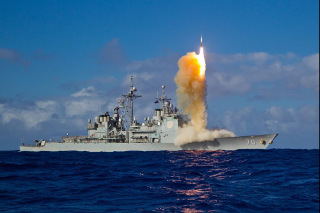 Failures are not uncommon given the difficulty of intercepting missiles in mid-air. This failure, however, comes with the Pentagon unusually tight-lipped, admitting only that the test took place and refusing to say what went wrong. Other administration officials confirmed the failure but had no further details.

The second straight failure of the system is particularly embarrassing as the US has been working hard to try to sell more such defensive systems abroad. That’s a tough sell for costly systems that have proven little success.

Even the success rate of such tests by the Pentagon is misleadingly high, as the interceptors are given all flight data on the targeted missiles, something they wouldn’t have in a real-life situation, making a square interception much harder.

24 thoughts on “US Missile Interceptor Test Fails in Hawaii”