After a two-day rout by South Yemen separatists left them in near total control of the city of Aden, pro-separatist forces have ceded back a pair of military bases at the request of Saudi Arabia, who is now attempting to mediate the deal. 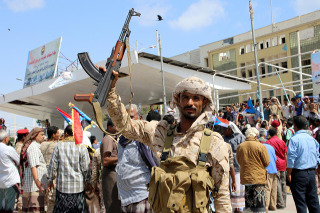 Aden had been under the control of the Hadi government, which the Saudis are attempting to reinstall with their invasion. The separatists now say they back the Saudi invasion too, and also support Hadi, but want him to fire his existing government.

That’s likely an issue that the United Arab Emirates is pushing, as the UAE has been seen souring on Hadi’s allies, and backing the separatists, who don’t have the long-standing ties to the Muslim Brotherhood.

Though placating the Saudis likely means continuing to endorse the war, it’s strange for the separatists to still present themselves as a separatist movement when the pro-Hadi forces already control materially all of old South Yemen, and the territory being fought over is largely North Yemen.