Turkey’s ongoing invasion of northern Syria is inflicting a heavy price on the civilian population in the Kurdish Afrin District, their first target, with Syrian doctors warning of a rapidly declining humanitarian situation and hospital supplies running low. 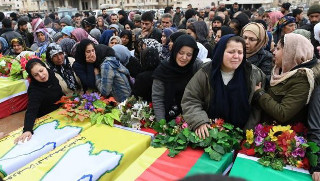 At least 65 civilians have been killed so far in the 11 days since Turkey’s invasion, with all but two of those deaths directly attributed to Turkish attacks. The other two civilians were in neighboring Azaz, which the Kurds attacked.

Afrin hospital’s head reported dozens of civilians are being wounded daily, and urged the UN to do something to stop the fighting. Turkey has insisted that they intend to attack all of the Kurdish-held parts of northern Syria, about 25% of the country.

Reliable figures on casualties in the fighting itself are tougher to come by than civilian tolls, with estimates in the hundreds, but both Turkey’s military and the Kurdish YPG offering a wildly different accounting, with both sides claiming to have killed far more and lost far less.