Turkey’s having trouble enough taking a single, not particularly interesting looking hill in Syria’s Afrin District, but officials have broad ambitions for their invasion of Syrian Kurdish territory, with President Erdogan vowing to “clean” the entire border. 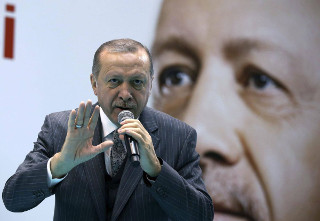 That’s an 822 km border, the majority of which is held by Syria’s Kurdish YPG faction, who holds both Afrin District and everything east of the Euphrates River. Turkey controls the area immediately west of the Euphrates up to Afrin, while the Syrian government holds the area in Latakia, and Islamist rebels hold the Idlib Province.

Turkey’s priority is likely to attack the Kurds everywhere along the border, though the Kurdish YPG, and its umbrella group the SDF, is warning they are prepared to take “appropriate measures” to any escalation of Turkey’s invasion.

The SDF had already suggested they were considering sending reinforcements to Afrin District to fight the Turkish invasion there, and Erdogan’s comments are clearly calling their shot on future invasions, which may convince the SDF the reinforcements should be sent sooner, rather than later.