Turkish Foreign Minister Mevlut Cavusoglu announced on Friday that, once the Turkish military has successfully occupied Syria’s Afrin District, and cleared it of Kurdish “terrorists,” it would be handed over to its “real owners.” 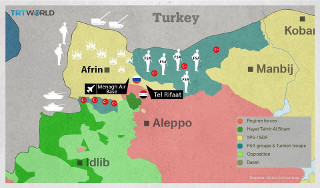 He was a bit vague on who that was, beyond “Syrians,” and it’s not clear if that means whatever non-Kurdish Syrians live in the Afrin District, or if it simply means they’ll hand it over to the Free Syrian Army (FSA) rebels.

In Turkey’s previous invasion of northern Syria, in which they seized part of Aleppo Province from ISIS, they handed over all that territory ultimately to the FSA and its allied rebel factions.

This could be increasingly problematic for Syria’s government, as the Kurds hold about 25% of the country, and Turkey intends to invade all of that. If that all ends up rebel territory it potentially greatly extends the Syrian War.

17 thoughts on “Turkish FM: Afrin to Be Handed Over to its Real Owners”