The largest in a series of recent Taliban attacks against the Afghan capital city of Kabul saw an ambulance full of explosives detonated at a police checkpoint. The attack hit a shopping district which is also home to a number of EU offices. 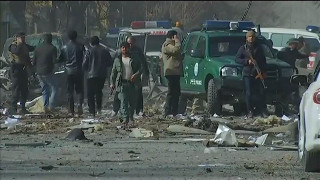 All told, 95 people were reported killed, and 158 wounded. Afghan officials say the death toll is expected to rise, with many of the wounded in critical condition. The injured toll might be understated too, as the hospitals are full, and people with less severe injuries are being asked to go elsewhere.

The attack did not actually hit the first police checkpoint into the district, where casualties would’ve been much lower. Rather, the Taliban driver bluffed his way through that checkpoint claiming to be taking a patient in the ambulance, and then detonated at the second, more crowded checkpoint.

As is often the case, he Afghan government issued a statement blaming Pakistan for the attack. Paksitan denied this, saying they had nothing to do with the incident.