Exact death tolls in the past week of fighting in Afrin are all but impossible to come by, but it’s always fair to say at any given time that both Turkey and the Kurdish YPG believe they’ve killed more than they’ve lost, and that civilian deaths keep rising. 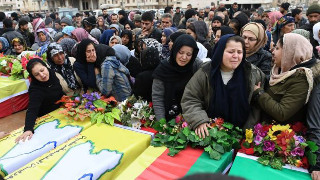 Turkey issued a statement Friday claiming three of their soldiers have been killed, along with 11 of their allies in the Free Syrian Army (FSA). The YPG claimed to have killed over 300 of the two groups’ fighters in the aggregate, while the Syrian Observatory estimated it in excess of 60.

Likewise, Turkey claimed to have killed 343 Kurds so far, while the Kurds of denied this, and claim only 43 lost. The civilian death toll is believed to be 38 at present, with virtually all killed by Turkish forces, and two killed in neighboring Azaz by Kurdish artillery fire.

All of this fighting has displaced many thousands of civilians, and could displace far, far more if the military advance and artillery fire wasn’t heavily limiting mobility and the opportunities to get out of harm’s way.