Erdogan’s Turkey has been known for being very quick on the trigger to arrest any perceived dissenters, particularly when those dissenters are also seen as pro-Kurdish. The invasion of Afrin, Syria, unsurprisingly has led to a new round of arrests. 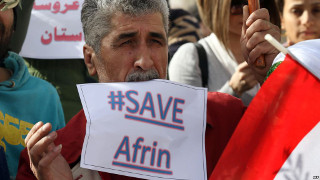 At least 91 people have been confirmed to have been arrested overnight Monday during nationwide “police raids” in Turkey targeting people who were “spreading terrorist propaganda,” which boiled down to expressing opposition to the invasion of Syria.

Prime Minister Binali Yildirim confirmed as much, saying opposing the war was “the biggest villainy,” and that Turkey intends to hold responsible anyone who commits this “crime” on social media.

The arrests have included top politicians within the opposition Peoples’ Democratic Party (HDP), which is often vilified for being pro-Kurd, and at least four reporters. Six of the detainees are also accused of planning a public protest in a park in the Kurdish part of Turkey, which is likely to carry an even stiffer sentence.

Turkey has banned all rallies, protests, public meetings, and even concerts in the capital city of Ankara for the duration of the war. Elsewhere in the country the laws aren’t very clear about banning public expressions of opinion, but the arrests are coming either way.

14 thoughts on “Turkey Arrests Scores for Opposing Invasion of Syria”