Turkey reported their invasion of the Afrin District had started back on Friday, with artillery fire against the Syrian Kurds there. Ground troops finally crossed the border Sunday, pushing into the area and clashing with the Kurdish YPG. 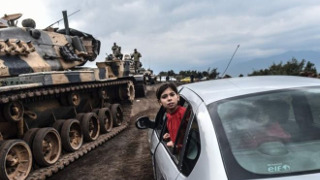 The Kurdish YPG reported that they’d expelled the first Turkish forces, though more are expected, and Turkey’s allies in the Free Syrian Army (FSA) claims to have 25,000 of their own fighters ready to help attack the Kurds.

Turkey’s President Recep Tayyip Erdogan has said his intention is the crush the Kurds “very quickly,” though he’s also made in clear that Afrin is just the first stop on an invasion that’s going to span Syrian Kurdish territory, roughly 25% of Syrian territory.

Turkey has been threatening the invasion for months, and called it imminent all of last week, giving Afrin’s Kurds time to mobilize every able-bodied person in the defense of their territory, and likely digging in to put up a much stiffer resistance.