Following up on a flurry of Friday artillery strikes against Kurdish forces in the Afrin District on northern Syria, Turkish warplanes carried out a large number of airstrikes against the small district, with at least 108 strikes reported, leaving the towns’ streets empty, and locals panicking. 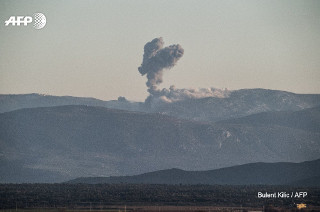 Syria’s government complained Turkey hadn’t informed them of the attacks, adding that they “strongly condemn” Turkish aggression. Syria had threatened to target Turkish warplanes raiding their airspace, however, and there’s so far no sign of this happening.

Instead the US-backed Kurds are getting hammered from the air, and Turkey is now not only massing their own troops at the Afrin border, but has bused in thousands of Free Syrian Army (FSA) rebels to attack the Kurds as well.

Afrin District is relatively low-value, except that Turkey has long maintained Syrian Kurds aren’t allowed west of the Euphrates, and this is the westernmost district under Kurdish control. Turkish officials have said after Afrin, the city of Manbij will be attacks, then Kurdish border territories east of the Euphrates.