The US State Department has issued a statement Friday warning that reports of Turkey attacking the Kurdish YPG in northern Syria are a significant destabilizing event, and would not help Turkey with its concerns about border security. 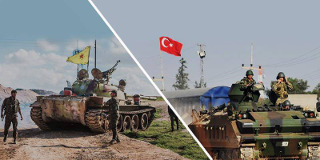 The statement made it clear the US, at the time, was unclear if Turkey’s attack was true, though Turkey’s Defense Ministry has since clarified the invasion is underway, and that there is no stopping it.

The US has opposed Turkish attacks on the Syrian Kurds for years, and in recent days suggested Turkey should hold off on such operations, instead focusing on ISIS. Turkey has already seized some ISIS territory in Syria’s Aleppo Province, and there is little ISIS territory left.

So from Turkey’s perspective, they’ve already waited out ISIS, and see it as time for their long-anticipated attack on the Kurds. With the US having heavily backed the Kurds against ISIS, this is going to be a major source of tensions between the US and Turkey.

16 thoughts on “US: Turkish Attack on Syrian Kurds ‘Destabilizing’”