The newest US National Defense Strategy, the first since at 2014, appears to set out a major shift in the focus of America’s massive military and its endless wars, with officials now saying that the global wars on terror, while continuing, will no longer be the “prime focus of US national security.” 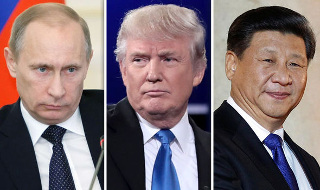 Instead, Defense Secretary James Mattis says the new strategy will put the primary focus of the US military engaging in power competition with other “great powers,” with Russia and China apparently the targets.

The “great power” conceit is a very 19th century concept, based around the idea that certain countries have uniquely great influence and authority worldwide. Historically, the great powers tend to view everyone else as pawns to be used in broader global strategies which establish the great powers’ pecking order with respect to one another.

That these nations are all major nuclear powers makes direct conflict hopefully unthinkable, but the US apparently still envisions committing its massive military to the task of repeatedly one-upping and needling them, largely for competition’s sake.

16 thoughts on “US Military’s ‘Prime Focus’ Will Be Competing With Russia, China”