UK-based NGO Airwars has offered a reckoning of the 2017 air operations of the US-led coalition against ISIS, involving attacks in both Iraq and Syria.The number of civilians killed increased dramatically, with estimates suggesting that they roughly tripled from 2016. 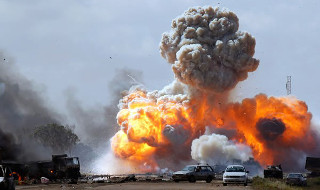 That’s a huge increase, and a troubling one, in no small part because the US doesn’t admit it’s even happening, with Pentagon assessments putting deaths at no more than a few hundred annually, and around 800 over the entire past four years.

Airwars attributed the escalating toll in part to the fact that 2017 saw an increase in strikes, and an increased focus on densely populated cities. They also suggested the Trump Administration’s relaxing of restrictions on airstrikes, and view of the ISIS war as a “war of annihilation” are factors.

14 thoughts on “NGO: US-Led Coalition Civilian Killings Tripled in Iraq and Syria in 2017”