On December 15, the State Department pledged $45 million in emergency food aid to Palestinians as part of the UNRWA West Bank/Gaza Emergency Appeal. Today, officials confirm the US will be withholding that food aid, “for now,” on top of other money being withheld from the UNRWA. 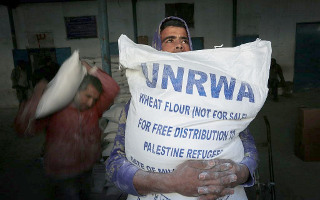 State Department spokeswoman Heather Nauert insisted in Thursday’s briefing that the pledge was meant to help with “forecasting” but was never meant as a guarantee that the money would actually be delivered.

Nauert went on to insist that the fact that the US wasn’t delivering the pledged food aid now doesn’t mean they might not conceivably give it to the UNRWA at some point in the future, and subsequently this wasn’t really a “cut.”

She insisted whether the US meets its pledges or not, they remain “the most generous country on the planet,” and believe that the rest of the world should be paying a lot more of the aid funding traditionally coming from the US.