According to UN officials with the World Food Programme (WFP), four mobile cranes have been delivered to the northern Yemen port of Hodeidah, to help with the unloading of humanitarian aid that arrives at the port by ship. 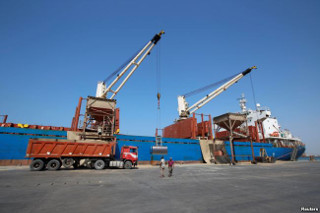 The cranes, which are expected to be operational pretty much immediately, are intended to replace four stationary cranes which were destroyed by Saudi warplanes in previous attacks against the port city.

The WFP said that the US paid for the ship that delivered the cranes, and both Saudi Arabia and the United Arab Emirates “facilitated” the delivery, which likely means they didn’t sink the ship outright when it got close to port.

The mobile cranes are less efficient than the stationary ones they’re intended to replace, however, and Hodeidah port is intended to handle more aid than ever, with some 15 million Yemenis dependent on the port as their sole access to food aid and medicine.

That said, the port has rarely been pushed to its maximum capacity even without the cranes, as a Saudi-led naval blockade has continued to seriously limit the amount of food allowed into the port.