The US-led coalition forces in Syria have announced their intention to create a new 30,000 man border force in northern Syria, along the border between Syria and Turkey. The force is expected to predominantly be Kurdish, but also include some Arab fighters. 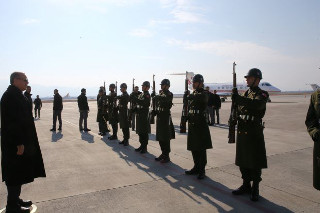 Spokesman Col. Ryan Dillon confirmed that the inaugural class of border fighters were already trained, some 230 members. There is no timeline on getting to 30,000, though in the past the US has struggled mightily to achieve large numbers in such training efforts.

Unsurprisingly, since this whole scheme boils down to training an arming a heavily Kurdish force, guarding what is ultimately Kurdish YPG territory, Turkey is furious, saying the entire enterprise is unacceptable.

Turkish officials say they’ve already summoned a US charge d’affaires in Ankara last week to protest the effort, and are being increasingly public about their opposition to the idea. Recent history suggests Turkey’s opposition to US actions in Syria will have no impact on them, however.

18 thoughts on “US to Create 30,000-Strong Border Force in Syria, Outraging Turkey”