According to Rep. Tulsi Gabbard (D-HI), Saturday morning’s false alarm in Hawaii, during which the government issued an emergency alert claiming a ballistic missile inbound, and didn’t withdraw the warning for 38 minutes, underscores the need for the US to seek diplomatic solutions “immediately” and without precondition with North Korea. 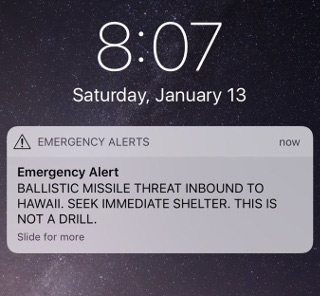 While officials maintain that the ballistic missile warning was a “wrong button,” it only caused the amount of panic it did because it was such a credible possibility, amid months of saber-rattling with North Korea. Such false alarms could easily lead to an accidental war, and with North Korea that would be one with nuclear dimensions.

Rep. Gabbard, a long advocate of diplomacy, says leaving such threats unresolved is an “epic failure of leadership,” and that America’s history of wars of regime change is why North Korea feels the need to have nuclear armed missiles as a deterrent.

US officials have at times suggested diplomacy as a possibility, but President Trump has generally downplayed it, and as Gabbard put it, set “unrealistic preconditions” which have kept such talks from ever happening.

South Korea and North Korea have since held talks, and the Russian government has indicated that North Korea is interested in talks with the US involving Russia as a mediator. The Trump Administration has insisted North Korea must unilaterally disarm before they’ll consider such talks.

But disarming without resolving the threat of a US attack is seen as a non-option for North Korea, which means no talks. As Gabbard points out, that isn’t a path to solving the situation, but rather an excuse not to try, meaning the threat continues, awaiting more false alarms or worse, a real war.