Israel has carried out one of its most substantial attacks on Syria in weeks, with a pre-dawn flurry of airstrikes against an army base and weapons depot outside of the capital city of Damascus. 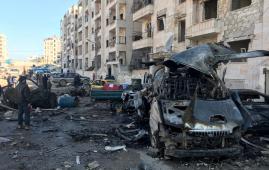 The airstrikes began at 2:40 am local time, with planes striking from Lebanese airspace. Syria claimed to have hit one of the Israeli planes in retaliation, though Israel has yet to confirm this.

This wasn’t the end, either. After the airstrikes, Israel fired a flurry of surface-to-surface missiles against the same Syrian base from Israeli territory. Syria reported their air defenses managed to intercept at least some of these.

As is so often the case, Israel did not comment on their attack. Despite having attacked Syria almost constantly throughout the past several years, Israel maintains that they are “neutral” on the war.