With their capture of their pre-announced borders a fait accompli, the Tuareg rebels today declared independence in Azawad, the region which was up until this point the northern half of Mali. Rejections were quick to follow. 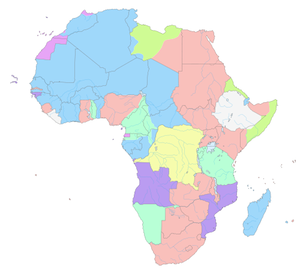 First to reject the declaration was the African Union (AU), which counts Mali (such as it is) as a member, albeit a suspended one. The AU position centers around the map drawn up at the 1884 Berlin Conference as the source of its position.

The conference was an attempt to formalize European colonial ambitions in Africa in the late 19th century, and ended with a sort of gentleman’s agreement formalizing the borders of different European-ruled colonies. Since these colonies eventually became the independent African nations in the AU, the organization claims the map that came out of that conference as inviolable, insisting that since late 19th century Europe didn’t envision a Tuareg region, one cannot be created now.

France, which was Mali’s colonial master until 1960, also rejected Azawad independence, insisting that the declaration has “no meaning” without the agreement of the AU. The European Union quickly followed suit, again insisting they wouldn’t recognize Azawad.

The United States joined in shortly thereafter, with the US State Department saying that they “reiterate our support for the territorial integrity of Mali” and stand by the AU and France in rejecting Azawad’s existence.

Securing international recognition is one of the most difficult aspects of secession, but while this has traditionally hampered the trade of “unrecognized” nations, Azawad’s status as the even poorer part of one of the poorest countries in Africa means very little trade was going on in the first place, and so far there are no indications the international community is prepared to conquer Azawad for the Malian junta, which seems decisively defeated.