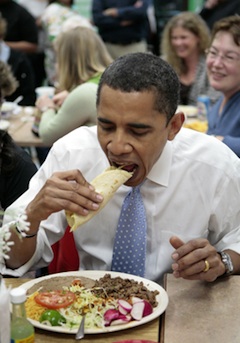 “They need to understand that bad behavior will not be rewarded,” Obama warned, addressing claims that North Korea is planning to launch a satellite into orbit. He went on to suggest that the “provocation” of launching a satellite could threaten the plan to send food to North Korea.

UN resolutions against North Korea in the past have banned all ballistic missile launches by the nation, and did not differentiate between weapons tests and satellite launches. Always eager to rail against the pariah nation, the US does not differentiate either.

Yet the threat to revoke food aid from the constantly starving population could lead North Korea to abandon its side of the deal, including halting its nuclear weapons program and allowing in nuclear inspectors. This would of course spawn further US measures against them, but with the revocation of food aid there will be little left for the US to pull from the table.