A March 2009 email from a top director at Stratfor (released as part of WikiLeaks’ Global Intelligence Files) shows that former US District Court judge Sam Kent, who has been in prison from May 2009 through November 2011 on an obstruction of justice charge, believed the charges against him were a result of him ruling against Halliburton. 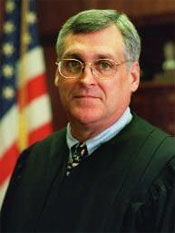 The Kent case saw him accused of “aggravated sexual abuse” and he was later sentenced for lying during the investigation. According to the email, Kent was having lunch of Stratfor director Lauren Goodrich, and said that the Bush Administration’s Justice Department had begun “sniffing around for dirt to throw at me just weeks after I ruled a heavy case against Halliburton.”

The Stratfor analyst “told him he was nuts to rule anything against Halliburton.” The case appears to be a November 2007 case against Hallburton Energy Services brought by the US government, though interestingly the Southern District of Texas already had a misconduct inquiry ongoing against him. The Justice Department was not revealed publicly to be involved until December.

Thus is it unclear whether or not the judge’s assumption that his Halliburton ruling was behind the inquiry was an accurate one. It is, however, yet another interesting insight into the level of inside information Stratfor had access to, and the sort of information liable to continue to leak out as WikiLeaks releases some five million such emails.

2 thoughts on “WikiLeaks Emails: Judge Told Stratfor Investigation Was a Result of Ruling Against Halliburton”