Reports coming out of the opposition and the state media in Syria today have 15 people being killed, including five members of the Syrian military and an unknown number of defectors to the Free Syrian Army (FSA). 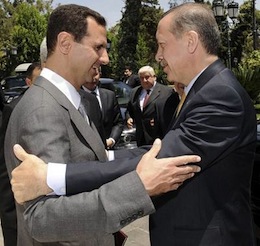 This included a significant battle reported in the town of Zabadani, near the Lebanese border. The town was reportedly the site of a large number of FSA forces, and regime tanks arrived on the outskirts of town to clash with them.

The continued fighting between the pro-Assad military and the growing Turkey-backed FSA led Arab League chief Nabil elArabi to warn today that the nation appears to be sliding toward a full scale civil war.

The continued violence comes in spite of the presence of Arab League monitors, and indeed at least one of the monitors has quit, saying he doesn’t believe their presence is having an impact. Despite this, it does seem the conflict on the ground has moved increasingly away from regime attacks on civilians to a battle between two belligerent forces with the civilians trapped in the middle.

In many ways this mirrors what happened in Libya, where pro-democracy protesters were eventually sidelined as Western forces chose to back more belligerent opposition factions with an eye toward civil war. Turkey has been extremely open in backing the Free Syrian Army as well as some other “pro-intervention” opposition factions, while the protesters calling for free elections and reforms are increasingly an afterthought.

In many ways, it is the rising Western support for the FSA which has allowed the Assad regime to sideline the real calls for reform, painting the peaceful demonstrators with the same brush as defecting troops joining a NATO-backed insurgency.

Russia, a long time ally of Assad, sees the situation quickly deteriorating, and is predicting NATO will soon launch a direct military intervention, complete with a ground invasion by Turkish forces, comments from officials like Turkish PM Recep Tayyip Erdogan appear to support this as the preferred course of action, at least among some hawks in NATO.

If such a war does break out, it will simply polarize the nation even more, with battle lines drawn up between the Ba’athist regime and the NATO-backed rebel military. For the civilian population, this will mean all the hopes for reforms and free elections will be forgotten and the question will just be which military strongman emerges to rule the country.