With the first free elections in Egypt leaving the Muslim Brotherhood faction with an overwhelming plurality (and potentially an outright majority) in the nation’s lower house of parliament, the Obama Administration has dispatched Deputy Secretary of State Bill Burns to Egypt to meet with their political leadership. 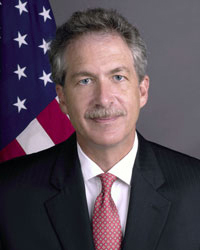 Given America’s long history of backing the Mubarak dictatorship, and that dictatorship’s harsh repression of political opposition, it remains to be seen how welcome the US will be in trying to cozy up to the likely future government of Egypt.

The State Department said the meeting focused on Burns “getting to know” the top members of the Brotherhood’s Freedom and Justice Party (FJP), as well as “to reinforce our expectation” that they “will also uphold Egypt’s existing international obligations.”

By which of course they mean the Mubarak government’s long-standing peace treaty with Israel. The State Department has previously claimed “assurances” from the Muslim Brotherhood about the treaty, but many in the group have openly called for key portions of the treaty, particularly as it relates to regulating Egypt’s security forces in the Sinai Peninsula, to be renegotiated.