With the Iowa Caucuses looming the various primary candidates are looking to secure additional votes in last minute TV interviews and speeches around the state. Former Senator Rick Santorum (R – PA), who has recently been shown surging in the polls, focused his comments on which war he’d start if elected. 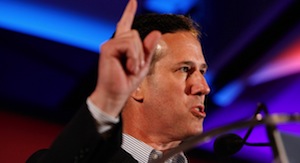 In his interview with NBC’s “Meet the Press,” Santorum declared that he would attack Iran, saying that he would demand that the nation’s nuclear sites be dismantled and attack Iran after they inevitably refuse.

The former Senator sought to take as hawkish a position as possible, while chiding President Obama, claiming that Obama’s failure to attack Iran risked turning the US “into a paper tiger.” Recent polls have shown Santorum a strong third in Iowa, and the effort to differentiate himself from Mitt Romney, whose policy is to destroy Iran through financial sanctions, and Rep. Ron Paul (R – TX) who has taken the policy of not destroying Iran at all, seems aimed at closing the gap with the top tier.

Iran’s civilian nuclear program includes a US-built research reactor, a Russian built power generating reactor, and enrichment facilities. As a member of the nuclear non-proliferation treaty Iran has continued to give the IAEA access as required under its safeguards agreement, but that access has been condemned by US hawks as insufficient.