US Ambassador to the United Nations Susan Rice today expressed outrage as her Russian counterpart, Vitaly Churkin, called for a UN Security Council probe of NATO’s killing of civilians in the Libyan War. 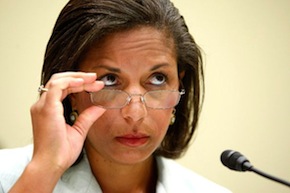 “This is something of a cheap stunt to divert attention from other issues and to obscure the success of NATO,” insisted Rice. NATO officials have maintained that there were no civilian casualties in their multi-month bombing campaign.

Russia urged the probe on the grounds of that claim and a New York Times article from last weekend in which the newspaper investigated allegations and confirmed a minimum of 40 civilians killed by NATO’s bombings, and likely many more.

NATO launched the bombing campaign after a UN Resolution authorized a no-fly zone to “protect civilians” and the revelation that large numbers of civilians were killed when NATO bombed them in the middle of the night is particularly inconvenient for Western officials looking to tout it as an epic military triumph.

French officials accused Russia of seeking the probe to distract attention from the death toll in Syria. Indeed while Russia has opposed UN action against Syria the probe seems particularly on-topic for the Syria issue with a number of Western nations, notably France, pushing for Libyan-style war in Syria as well.