Speaking today on CNN, former Vice President Dick Cheney lashed President Barack Obama over the loss of a surveillance drone in Iran, saying that he should’ve doubled down on being caught spying with an overt attack on Iran. 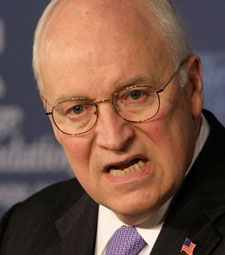 “The right response would have been to go in immediately after it had gone down,” Cheney insisted, saying that this could have been accomplished either with a ground invasion aimed at “recovering” the lost drone or by bombing the area until the drone was destroyed.

When pressed on whether or not bombing Iran would have “potentially led us into a war with them” in a later interview, Cheney cited the bombing of a Marine barracks in Beirut in 1983, saying that was “Iranian-supported.”

The unspoken answer then is not only would attacking Iran because a US spy drone was lost probably have led to a war with Iran, but that Cheney thought this would be a good idea. He went on to insist it would be a “fairly simple operation.”