In an interview released today by The Jewish Channel (TJC), Republican Presidential hopeful Newt Gingrich sought to court the pro-Israel vote by claiming that not only do the Palestinians not deserve a state, but that they are an “invented people” made up simply to make things tough on Israel. 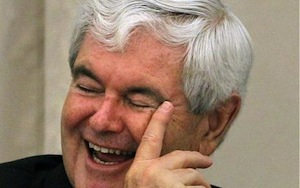 “Remember, there was no Palestine as a state. It was part of the Ottoman Empire,” Gingrich insisted. The claim is a common one made by Israel’s far right when arguing against the two-state solution to the ongoing occupation of the West Bank and Gaza Strip.

Gingrich’s take on the situation is that Palestinians are just Arabs, and that they should just go to some Arab-dominated country. Of course while Palestinians are ethnically Arabs, and there are other countries in which Arabs make up the majority of the population, it is not common practice (outside of Israel) to ascribe territorial possessions entirely on the basis of race, and those Palestinians expelled from the occupied territories have often ended up in refugee camps elsewhere for generations.

After the bulk of Palestine’s Jewish population fled Roman rule in the first few centuries AD (fleeing mostly to the Sassanid Empire), it was a mostly Christian province for generations. The territory became overwhelmingly Muslim in the 7th century, and was under the rule of various Muslim empires (with a brief Crusader presence) through the end of World War 1, when the territory was claimed by Britain.

Currently there are almost four million Palestinians living under Israeli occupation within the occupied territories, and another 1.5 million living inside Israel itself.

And while “no such thing” is a popular allegations for bloggers to whip out in defense of keeping millions of Palestinians under occupation or potentially expelling them entirely from their homeland, the claim creates other problems if applied to other situations. Gingrich, for instance, supported the US occupation of Kosovo, even though there was no historic independent Kosovar state.

Gingrich’s claim is not unique, but is unique among “mainstream” US politicians, who have usually tried not to play the race card on Israel, something which seems to inevitably put the Israeli far right’s claim to unique racial hegemony over the region, and not the people in the occupied territories, in an extremely negative light.

105 thoughts on “Newt: No Such Thing as Palestinians”