Speaking today to an investor conference, US Deputy Assistant Defense Secretary for Manufacturing and Industrial Base Policy Brett Lambert insisted that the Pentagon would do whatever it takes to ensure that efforts to balance the US government’s budget does not harm weapons manufacturers. 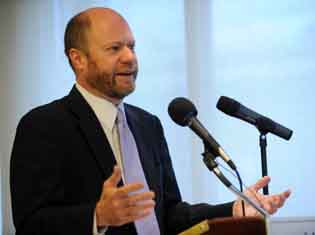 Condemning the mandated spending cuts as “fiscal castration,” Lambert cautioned that the cuts would destroy America’s industrial base, by which of course he means the companies who make weapons for the military.

In reality, the cuts are largely fictional, and cut into the hypothetical budget increases the Pentagon expects in future years. The worst-case scenario brings the Pentagon’s budget to 2007 levels.

Lambert declined to comment on potential cancellations if the Pentagon was forced to revert to its 2007 spending levels, saying that his office was only interested in the health of the “industrial base” and the impact it would have on merger and acquisition activity among the companies.