Military sources confirmed to the Interfax new agency today that Russia has delivered a supply of cruise missiles to Syria, under the terms of a contract that was originally signed in 2007. The exact timing of the delivery wasn’t revealed. 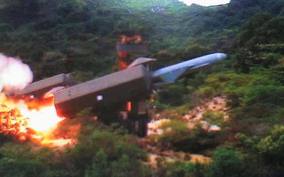 But it was quickly condemned by Israeli officials, who said they posed a possible threat and that the missiles might also end up in the hands of Hezbollah. Western officials have been pushing for an arms embargo on Syria, citing violence against protesters.

These particular missiles, however, are part of the Bastion anti-ship system and would not be used against civilian protesters in cities. Rather, they are designed to prevent ships from attacking the coast and to oppose an amphibious landing by a foreign invasion force.

Which of course is why Israel is so concerned about Hezbollah getting a hold of some, as Israel regularly attacks southern Lebanon, and during their most recent invasion four Israeli Navy personnel were killed off the Lebanese coast by a missile fired at their ship.